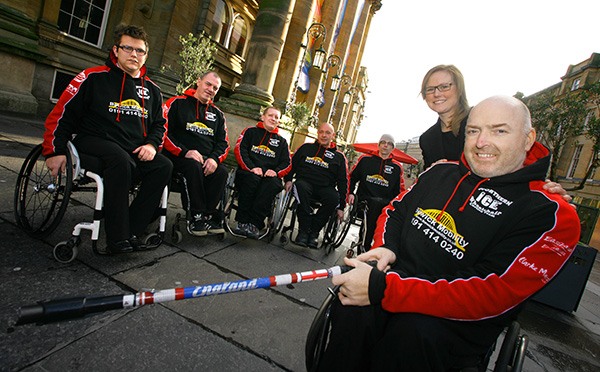 A North East law firm is working with a local wheelchair sports team in a bid to help them compete internationally.

Clarke Mairs, based in Newcastle city centre, is sponsoring the Northern Ice Wheelchair Curling Team, who have set their sights on representing England at the sport.

Northern Ice is the only wheelchair curling team in the country. They are in regular talks with the English Curling Association and would like to represent England in a forthcoming international curling competition to be held in Norway. If the team members are able to represent England, then this will open the door for them to be eligible to play for Great Britain in the future Paralympics.

The team has ten members living in Newcastle, Northumberland and Cumbria, with ages ranging from 18 to 51 years old. Most of the team members have spinal injuries and are paralysed from the waist down.

Stewart Pimblett of Seghill formed the curling team in 2010 after watching the sport on the television coverage of the Winter Paralympics. Stewart and his friends, who already compete in a wheelchair basketball team, decided to take up curling but realised that there were no local opportunities to try it out, so they set up Northern Ice. They have been training at Borders Wheelchair Curling Club in Kelso ever since.

Team members make the challenging three-hour journey to Kelso in the Scottish Borders to train for two hours a week, before returning in the evening. Curling teams usually train up to twenty hours a week, so Northern Ice are looking for ways to be able to train closer to home, and to take on specialised coaching staff.

Stewart said: “We’re very grateful to Clarke Mairs for becoming our newest sponsor. Their contribution will make a huge difference to us in terms of buying more clothing, equipment, covering training costs and funding entry into competitions.

“Wheelchair curling is both interesting to watch and exciting to play, and in creating Northern Ice we’ve introduced another Paralympic sport for disabled individuals in the area to try their hand at.

“In a society where integration is a hot topic, and with the legacy of London 2012 still in the air, it’s essential that we offer people the opportunity to find the sport that’s right for them. Wheelchair curling is another great addition to the sports that have been adapted for those with physical impairments, and we’re always looking to welcome new players on board. We’re particularly in need of female members, as we’re unable to compete as an England team without women players.”

Tim Clarke, partner at Clarke Mairs, said: “We’re delighted to sponsor Northern Ice and we’ve been very impressed by their dedication and commitment to their sport. We’re looking forward to following their journey as they set their sights on becoming the official England wheelchair curling team.”

Other sponsors of the team include Northridge Healthcare, Easibathe, Apex Blinds and Berwick Mobility, and Northern Ice welcomes queries from other companies who are interested in sponsorship opportunities.